Tara and the Cheeky Monkey

Tara was sitting in the shade of the oak tree in the meadow behind her house, with Ash-ting her little grey kitten.  The girl was engrossed in colouring in a picture of an angel when an acorn landed with a thump right by her and made her jump.  When a second one bounced on her colouring book she stood up and peered into the branches.
‘Maybe it’s a squirrel,’ she commented to her kitten but he responded with a puzzled frown, ‘I don’t think so.’

Just then a third acorn plopped onto her shoe and she and Ash-ting looked up again.  This time they saw a cheeky little face grinning at them.
‘It’s a monkey,’ Tara gasped.  ‘What can it be doing here?’
‘I don’t know!  I’ll ask it,’ replied Ash-ting.  He called up to the animal in cat language and luckily the monkey understood.
He said that he had always been kept in a cage by a horrid man but he longed to swing in the trees.  Today his cage door was left open so he escaped!
Ash-ting translated for Tara and she felt so sorry for the poor creature.
‘I wish we could help him,’ she said.  ‘They’re bound to capture him soon and put him back in that cage.’
Ash-ting nodded.  Tara closed her eyes and said, ‘Angels of Animals, please help this monkey.’
Just then they heard a terrible barking and saw a huge dog racing across the meadow towards them.  A thin man was running behind him holding his lead.  He had bulging eyes, a scrawny neck like a chicken and was yelling, ‘Get him Pongo.  Stay on the scent!’
With a yowl Ash-ting dashed to the oak tree and scrambled up to the first branch.
Tara screamed as the great hairy dog seemed to charge directly at her.
‘Keep away and he won’t hurt you,’ shouted the man.  ‘My monkey’s up there and I want him down.’  He turned to the dog and bellowed.  ‘Be quiet you!’ And he aimed a kick at him.  Luckily it missed but the poor beast sat down, looking terrified. Tara wanted to shout at the man but was too scared.

The monkey had moved to a higher branch.  They could hear him chattering as he watched them through the leaves.
Just then Dad hurried across the meadow to see what the commotion was about.  ‘Is it your monkey?’ Dad asked.
The man glared and roared.  ‘Here you keep out of my business.’
Dad frowned but was very polite.  Tara could tell he did not like the man.

Ash-ting buzzed to Tara.  ‘I’ve got an idea to help the monkey but I’ll have to talk to the dog first.  The little girl laughed as he outlined his plan.
The dog cocked his head as he listened to the kitten but he said he was too scared of his master to do what Ash-ting suggested.  Tara could hear the monkey chattering and this time Pongo said he’d do it.  The dog stood up and moved towards the tree.  The man was watching the monkey and didn’t appear to notice.  Tara saw he was not gripping the lead so tightly.

Suddenly the monkey leapt from the tree and landed squarely on Pongo’s back.  The dog jerked hard on the lead and Tara held her breath.
The man fell flat on his face and let go of the lead.  ‘Run,’ yelled Tara.  Now she was laughing with excitement.
The monkey rode on Pongo’s back like a jockey on a horse and they made for the copse on the other side of the meadow.
The horrid man picked himself up and chased after them yelling terrible threats.  Dad ran too.  Quick as lightening Ash-ting jumped down from the tree and into Tara’s arms.  Then they raced after them.

They could see the monkey swinging in the branches of the trees in the copse and having a wonderful time.  Dad and the man stood below and watched.  After a while the enraged man called his dog.  When the dog slunk towards him his nasty master picked up a stick and hit him.  The dog yelped.  With Dad beside her Tara dared to shout very loudly, ‘Stop it!’  The man lifted his stick as if he was going to hit her but she knew he wouldn’t dare to.  He glowered at her.

She whispered, ‘Angels of animals please help the dog too.’  She could see more golden lights appearing.
Dad whipped out his mobile and called the police who said Animal Welfare would be alerted.
Dad said to the man, ‘The police are on their way.’
The horrid man looked at him in fury.  Then he started to run away calling, ‘Pongo! Come here at once.  Pongo!’
The poor dog got up reluctantly to follow his master.
‘Don’t go,’ called Tara.  ‘I’m sure there’s a good home for you.’
Ash-ting called to him in cat language.  ‘You don’t have to go back.  Stay here and we’ll find you nice people to live with.’
The angels were nodding and Ash-ting and Tara knew they would arrange it.  The dog hesitated.  Then he sat down again as his master disappeared from view.
Dad stroked Pongo behind his ears.  He loved that and didn’t look fierce any more, just soppy.  ‘And we’ll change your name old chap,’ Dad told him.

Ash-ting asked the dog what he’d like to be called and he replied, ‘Rex!’
‘We’ll call him Rex,’ Tara said to her Dad and he told her that meant King.

By the time the police and animal welfare people had arrived quite a crowd had gathered to watch the monkey leaping about in the tree tops, while Rex sat obediently by Dad.
Tara and Dad told them what had happened but not the bits where Ash-ting talked to the monkey and the dog!
The animal welfare lady said she thought she knew who the nasty man was.  ‘He’s been in trouble before for cruelty to animals,’ she said looking grim.  ‘You can be sure I’ll be visiting him.’
She bent down to stroke Rex and Tara saw an angel whisper something in her ear.  After a while she stood up and said thoughtfully, ‘I know someone who loves dogs and is looking for a dog just like you.  They’ve got lots of land.  It will be just right for you.’
Tara and Ash-ting smiled at each other and the girl whispered, ‘Thank you’ to the angels.  She knew they would organise a perfect home for him.

The animal welfare lady looked up at the monkey who was sitting on a branch peering down at her.  ‘Where will you take him?’ asked Dad.
‘To a monkey rescue centre where he can play with other monkeys and there is an enormous enclosure with trees where he can play to his heart’s content.’
Dad and Tara were relieved and delighted.
The woman put some bananas in a travelling cage to entice him down but he stayed up in the tree.

Tara whispered to Ash-ting.  ‘Tell him about his new home.’  And she saw the monkey become very still as he listened to the kitten.
At first the monkey chattered very loudly like a toddler saying, ‘No! no! no!  Don’t want to come down,’ and he threw himself onto the branch and kicked his legs in the air.
Everyone laughed but the little furry creature was cross.
Ash-ting reminded him there would be lots of bananas and trees to swing in.  At that the monkey jumped down.  He ran over and patted the kitten, who was rather startled.  Then he ran into the cage and grabbed a banana throwing the peel at a policeman before the door closed on him.
Everyone laughed again, even the copper.
The animal welfare lady said she was surprised how easily he went into the cage.  She did not know about Ash-ting’s intervention.
As Tara and Ash-ting waved goodbye they could see the Angels of Animals lovingly stroking the dog and the monkey.
‘Woof,’ barked Rex gratefully.
But the cheeky monkey just winked at them. 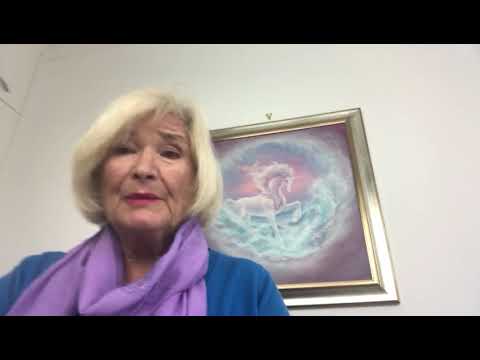