The old man looked out of his window into the valley below.  He had always lived on the mountain with wonderful views of the landscape and never ceased to wonder at the beauty, the rich colours and scenery of the mountains, touched by the light that no matter the weather, always seemed to glow.

Today, however, the light seemed not quite as bright, as if some darkness had descended.

His gaze fell on the village at the bottom of the valley.

The village was usually bright with sparkling light, and he enjoyed his daily visit to buy food, though he was usually viewed with some curiosity in his old and tatty clothes.

The old man put on his hat and coat,  picked up his walking stick and stepped out of his house.  It was a warm day, the sun was shining through light cloud, “No reason at all for the darkness” he thought to himself.  He slowly and carefully descended the path that led from his house to the road, there he turned towards the village.

He saw no-one else walking that day, usually the road was busy with people.  He stopped half-way and sat on an old tree trunk at the side of the road, this was his resting place, time to sit and ponder on where he had come from and where he was heading.  Always a useful place, he found as life had taught him not to keep rushing around but to sit now and again and reflect.  Today was no exception.  He looked around him, the village was near enough now to see the houses and their pretty gardens, the animals in the fields, a few people were wandering around looking a bit dazed, certainly something must have happened because it felt so different. He stood up and continued walking.  He saw a man coming towards him, and recognized him as one of the farm workers.

He dipped his hat as the man walked by, hoping to catch a word, but the man walked passed as if he had not seen him.  “Strange?” he thought, as before he had always stopped for a greeting.

By now the old man was aware that indeed something very odd was happening and he was determined to find out what that was.

As he approached the village, he saw an old lady sitting on a bench outside her house.  The old man walked towards her.  He stopped and bowed “Good morning, dear lady, I trust all is well today, the people seems unusually quiet.”

The old lady turned and looked at him, but her eyes were blank and she didn’t answer.  She just stared at him as if she had never seen him before.

Then she stood up and walked back into her house and closed the door.

The old man was puzzled, he thought of following her and knocking on her door to ask if she was all right, but something stopped him and he turned back down the path.

By now the sun was shining brightly out of a clear blue sky, the birds were singing in the trees, the flowers looked brilliant in their bright colours.

“What a beautiful day!” said the old man out loud.

There was no-one else around to share in his joy as he felt the warm sun reaching through his coat.

He felt so hot that he took it off and folded it neatly and placed it over his arm before walking on.  His feet led him to the village square, “Now there must be someone here at least” he thought, remembering that it was market day and normally the village was a hive of activity.  But no, the square was empty, no people or stalls, none of the usual hustle and bustle of market day.

He sat down on a bench and pondered.

He looked around at the familiar scene, ever since he could remember he had been coming into this village, it was as much a part of him as his coat that now lay beside him on the bench.  He turned and his gaze fell a little higher than the rooftops of the houses in front of him, up into the blue sky, except instead of blue sky he saw grey and darkness.

Shadows fell over each and every house.  He looked around and everywhere was the same, as if the light had vanished.  He looked at himself and turned his head to the sky above him, there was no darkness there as he felt the sun beating down.

He stood up and walked towards one house that looked particularly dark and gloomy.  He arrived at the door and looked up, above him the sky was blue, but darkness still lay over the house.  He knocked on the door and waited.

He heard movement inside and a child opened the door a slight crack and peered round.  The child said nothing, just looked at the old man.

“Hello,” said the old man.  The child stepped aside as a young woman came to the door.

She looked at the old man, took the child by the hand and closed the door.

Perplexed, the old man slowly walked away and turned back up the path towards his mountain home. Something strange was going on and he couldn’t make out what was creating all the darkness and why the light had disappeared.  He arrived home, sat down on his chair on the verandah and fell asleep.

He woke with a start, he had an idea. Now this old man was able to see beyond what most people could see with their physical eyes.

He especially loved colour and rainbows.

Rainbows appear after a storm, when the rainclouds are passing as rain is still falling and the sunlight streaming through the rain creates the spectrum of colours of red, orange, yellow, green, blue, indigo and violet fall as an arc across the sky down onto the land.  According to legend, there is a pot of golden treasure at the end of the rainbow, it’s just that the end can very rarely be found because it is always moving, just out of reach.  The old man marveled at the wonder of creation every time he saw a rainbow and somehow he had found a way to capture the essence of the rainbows and put them into crystal glass jars.

He had rooms filled with jars of every colour.  The colours weren’t visible as one would imagine, as to the naked eye all the jars looked identical and there was no way of telling which colour was in each jar, except by picking up a jar and feeling it.

The old man knew which colour was in each jar because each colour vibrates to a different frequency, and he also knew that every person knows intuitively which colour they need.

The old man picked up jars of colour and put them into a very large bag, which he then placed on his wheelbarrow as it was far too heavy for him to carry.  He turned once more out of his house and closed the door behind him.  Slowly and carefully the old man pushed the wheelbarrow down the path and onto the road below.  He stopped again to sit on the old tree trunk and went over in his mind what he was going to do.  He realized that in order for his idea to work he had to find some way of making people stop and look at him, as from his experiences earlier, everyone he stopped to talk to walked away as if they had not seen him.  “Am I invisible?” he asked, “how can people not see me and why aren’t they stopping to talk to me as they have done before?”  He puzzled this for a while and then saw something out of the corner of his eye that might help his plan.

He turned around and saw a beautiful flower in a tree, he had never noticed it before, it was the brightest, biggest yellow flower he had ever seen, it glowed with iridescent beauty and sparkled in the sunshine.

“Now that’s so bright like the sun,”  he thought, “people are bound to see it.”   He reached up and picked the flower and placed it on top of the crystal jars.  He set off again pushing his wheelbarrow towards the village.

This time the village square was full of people, the market stalls had been set up and people were walking around although they still seemed dazed and distant.

He looked around and found a place to set up his wheelbarrow filled with the crystal jars.

He looked up at the sky and saw the same grey darkness overhanging each house and then he looked around at the people and noticed that they too were under a cloud, like an umbrella.

He placed the yellow flower by the wheelbarrow, sat down and waited.

Before long some children came to look at the wheelbarrow.

The old man began to greet them but they ignored him and picked up the jars and as each child held a jar, the dark cloud lifted from above their heads.

They began to smile and laugh and ran off holding their jars high in the air.  Other people noticed the children waving their jars, and they stopped them and asked what they were doing.

The children pointed to the old man and the wheelbarrow and they turned towards him.

The old man stood up and began to speak but they brushed past him and each picked up a jar, like the children they began to smile and laugh and their dark umbrellas lifted as if by magic.

Soon his wheelbarrow was empty of all the jars.  All that remained was the beautiful yellow flower.

He looked around, the darkness overhanging the village had vanished and had been replaced by the iridescent light of a rainbow.

The old man stood up and slowly pushed his wheelbarrow back up to his mountain home, his work was done.  Once again he sat down in his chair on the verandah.

He picked up the beautiful yellow flower and breathed into the centre and felt a warmth inside he’d never known before.  The flower glowed even brighter and he heard a voice, “Come”, it said, “It is time to go home.”

The old man looked up and saw a rainbow, he stood up and walked towards the light with the yellow flower in his hand. 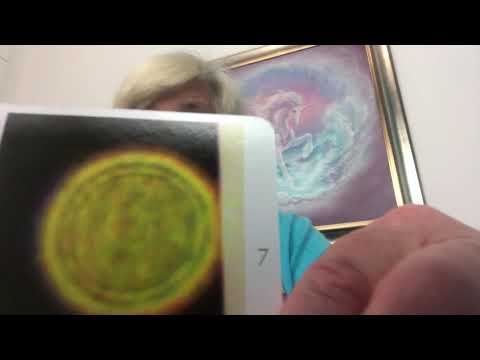 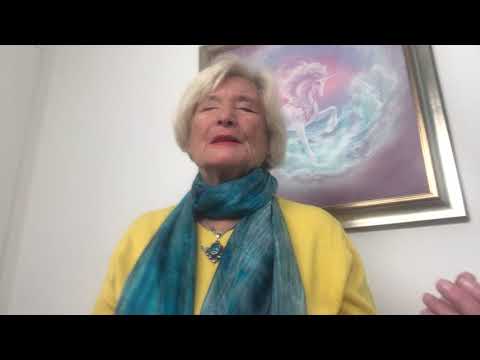